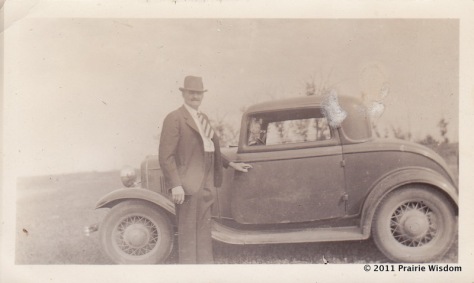 Great grandpa was someone you minded. In other words he ruled the family roost. When he brought home the family’s first car everyone was excited. As he drove into the yard, he ordered the barn doors opened so he could park inside. My great uncles opened the doors and he drove into the barn. Instead of hitting the brakes, he began to yell, “Whoa! Whoa! Whoa!” Unfortunately, what works with horses does not work with cars. He kept shouting “Whoa!” as the car traveled down the length of the barn.

The children (my grandma, great aunts and great uncles) did not laugh. They did not shout. They did not know what to do. When they realized the car was not going to stop, my great uncles ran to the other end of the barn and threw the back doors open. Great grandpa drove by them and right out of the barn still shouting “Whoa!” and pulling back on the steering wheel as if it were reins.

As great grandpa headed towards a field he finally remembered to depress the brake and the car lurched to a halt. The children stood quietly watching and waiting as their father muttered to himself, turned the car around and approached the front door again. This time he drove in and stopped the car without incident. That was that.

Years later, mom would giggle as she told this story and sometimes when we entered the garage she would say, “Whoa car!”

My outlet for
humor, creativity
and variety while
embracing life
one post at a time

What I Am Writing About